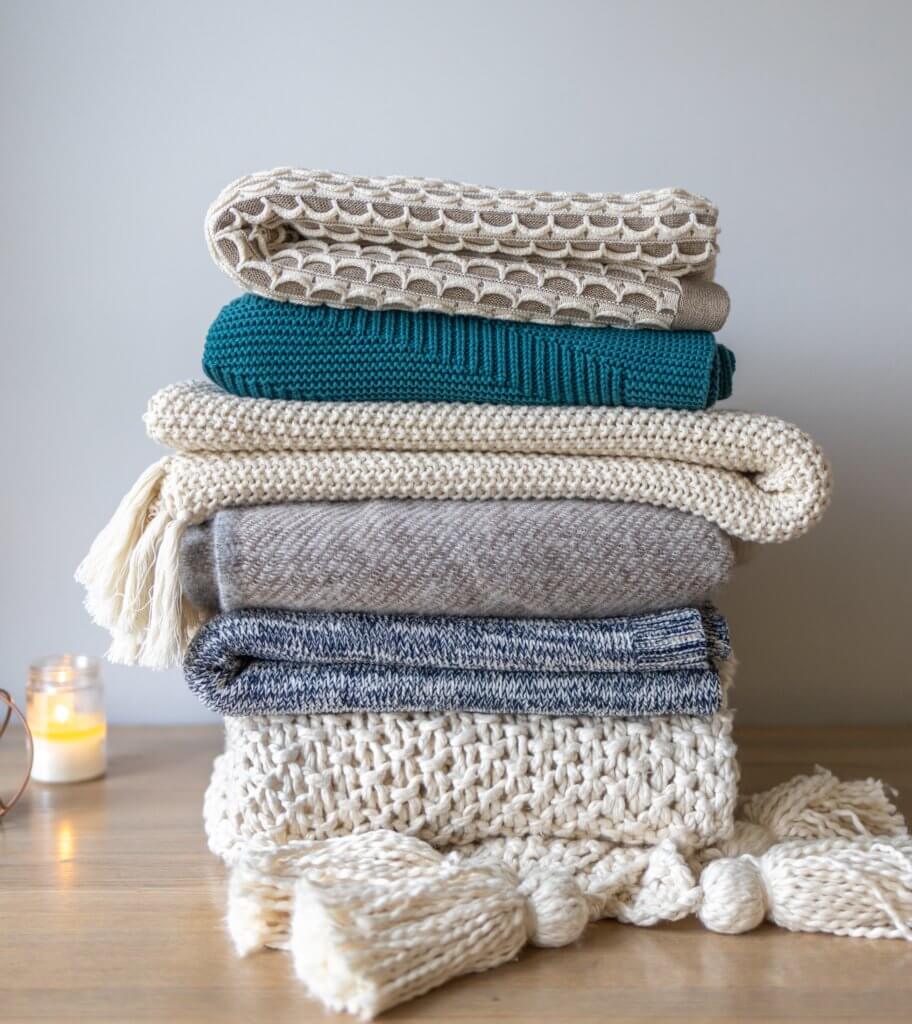 If you are worried about electromagnetic radiation emissions from your electric blanket, you can always switch to a low EMF or low voltage blanket. But when you search for such blankets, you will get overwhelmed by the number of options available in the market. So, I’ve done a fair bit of research and came up with the best low EMF electric blankets you can buy right now.

The QULONG Home Electric Blanket is one of the best low EMF blankets that are available out there. It comes in different sizes. Not to mention it is full of useful features such as intelligent temperature adjustment, advanced heating protection, and much more. Plus, it is made of cotton-like plushy fabric which ensures ultimate comfort.

But only one product might not be able to fulfill everyone’s needs. Don’t worry as there are countless other high-quality low EMF electric blankets in the market, each with its own unique features. Also, the price range is another important thing to consider. In this article, I’ll tell you about what I think are the best 5 low EMF electric blankets you can buy right now. 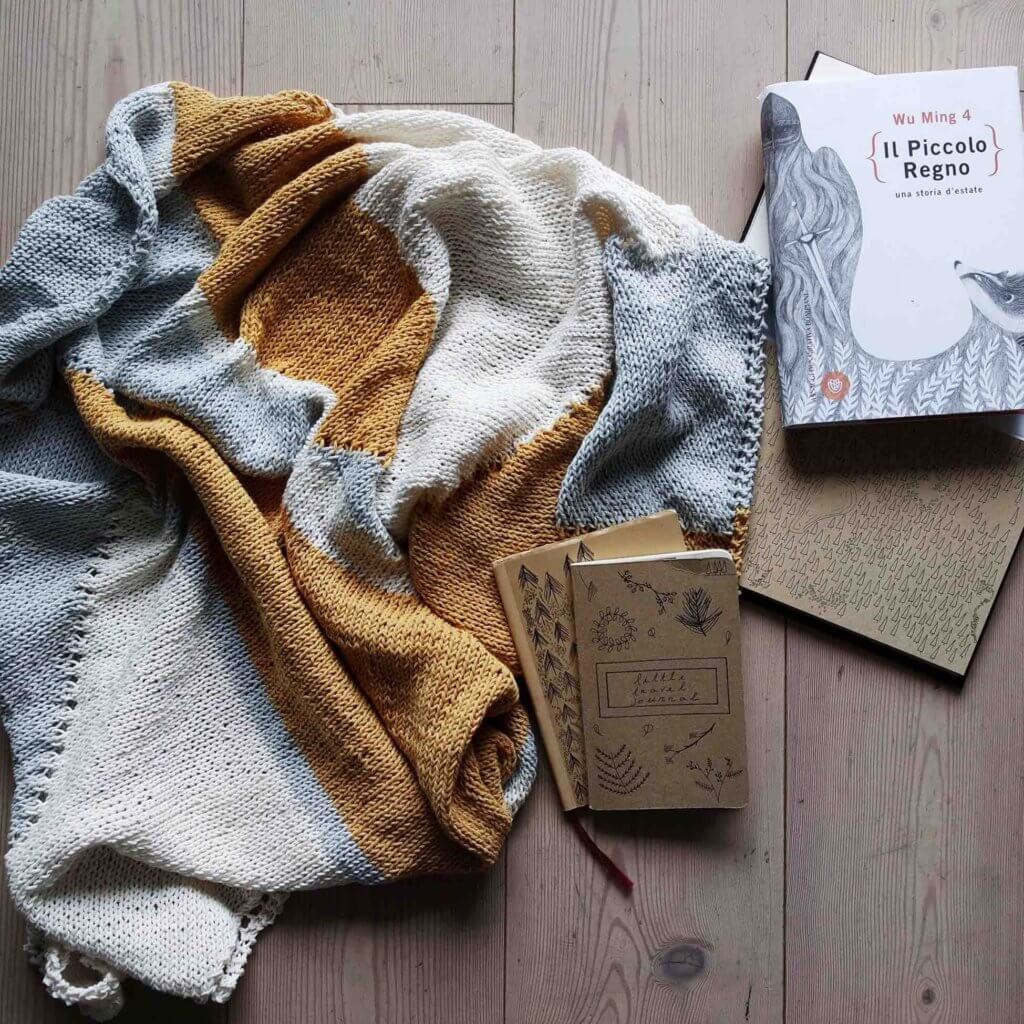 Down here, I’ve listed the five best low EMF electric blankets based on build quality, features, and pricing. Just have a look! 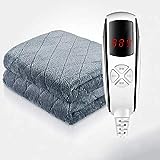 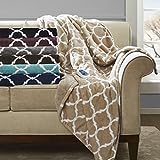 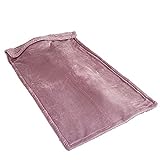 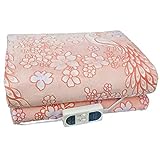 When it comes to low EMF electric blankets, there are very few that can compete with the QULONG Home Electric Blanket. In terms of quality and feature set, it is on a whole different level. It is made of plush fabric that gives a cotton-like feel and comfort.

Intelligent Temperature Adjustment: This blanket comes with an intelligent temperature adjustment feature that changes the temperature depending on the surroundings to ensure maximum comfort. Not to mention it also comes with four levels of heat settings.

Advanced Protection: This blanket has a leak-proof design. Even when it comes in contact with water, it will not leak any electricity.

The Beautyrest Heated Ogee Throw Blanket is another good-quality low EMF electric blanket that you can buy right now. This blanket is a bit bigger (60 inches x 70 inches) compared to standard blankets (50 inches x 60 inches). This makes it perfect for office, sofa, or bed use.

And the most unique aspect of this blanket is its “Smart Comfort” technology. This technology automatically adjusts the warmth of the blanket based on the ambient temperature of the room, and the spot and the overall temperatures of the blanket. This is to ensure a consistent and even flow of warmth. And this blanket emits literally no electromagnetic radiation.

Overall, this is one of the best low EMF electric blanket money can buy.

Easy Maintenance: This blanket is made of polyester and is super soft. And you can easily wash it in the machine. Just make sure to wash on cold and tumble dry in low heat.

The JFJL Heated Plush Electric Blanket is another great option if you are looking for a low EMF electric blanket. This blanket is made of 100% polyester and feels very soft and comfortable.

When it comes to EMF emission, it performs at exactly the same level as the Beautyrest blanket. The JFJL Heated Plush Electric Blanket has two independent heating jones. You can heat both sides simultaneously or separately from each other. The blanket also comes with a warming system that senses and adjusts the temperature of the blanket to provide maximum comfort.

Energy Saving: This electric blanket is equipped with a thermostat. So you can turn it down a bit to save some money on electric bills while using this blanket.

Multi Settings Controller: The blanket comes with an easy-to-use multi-settings controller with four heat levels. Choose how warm you want to feel while you use the blanket.

Auto-Off Feature: The blanket has a two to eight hours auto-off feature for safety, convenience, and energy saving.

Cotton electric blankets are very hard to find. But the eCare Extra Low Voltage Electric Blanket is an exception to that. The outer covering is made of 100% cotton, making it a very comfortable blanket. Plus it is machine washable.

This blanket operates on less than 21 volts DC (direct current) power and well under 60 watts. This is a bit more voltage than what most low voltage blankets offer. But we checked it with our Geiger–Müller and it didn’t show any alarming results. You can also buy an EMF meter and check for yourself if you’re paranoid about using it.

Three Heat Settings: This blanket comes with three different heat settings and with a booster time. Choose your warmth level when you sleep.

2 Years Warranty: One of the best things about this blanket is that it comes with a two-year warranty. If anything goes wrong, Econo-Heat promises to back you up.

The ZHFC Dual Control Electric Blanket is made of woolen fabric. So, when it comes to comfort, you can rest assured that you will be getting a warm, peaceful, and cozy night’s sleep even on very cold days.

This blanket has minimal electromagnetic radiation emission. On top of that, it is equipped with dual control heating technology with an advanced overheat protection system.

We don’t really recommend wool as it is thick and hard to manage. Unless you live in a super cold climate they can also get very warm. Uncomfortable sometimes. But, if you do live somewhere very cold or just prefer wool over cotton, the ZHFC Dual Control electric blanket is your best bet.

Rapid Heating: The ZHFC Dual Control Electric Blanket comes with a rapid heating feature. Only 15 minutes of preheating and you are ready to enjoy the soothing heat of this blanket on a cold day.

Safety: This blanket comes with advanced overheating protection. So, no more worrying about your blanket becoming too hot. Also, the auto shut-off feature provides great convenience and safety to the user. 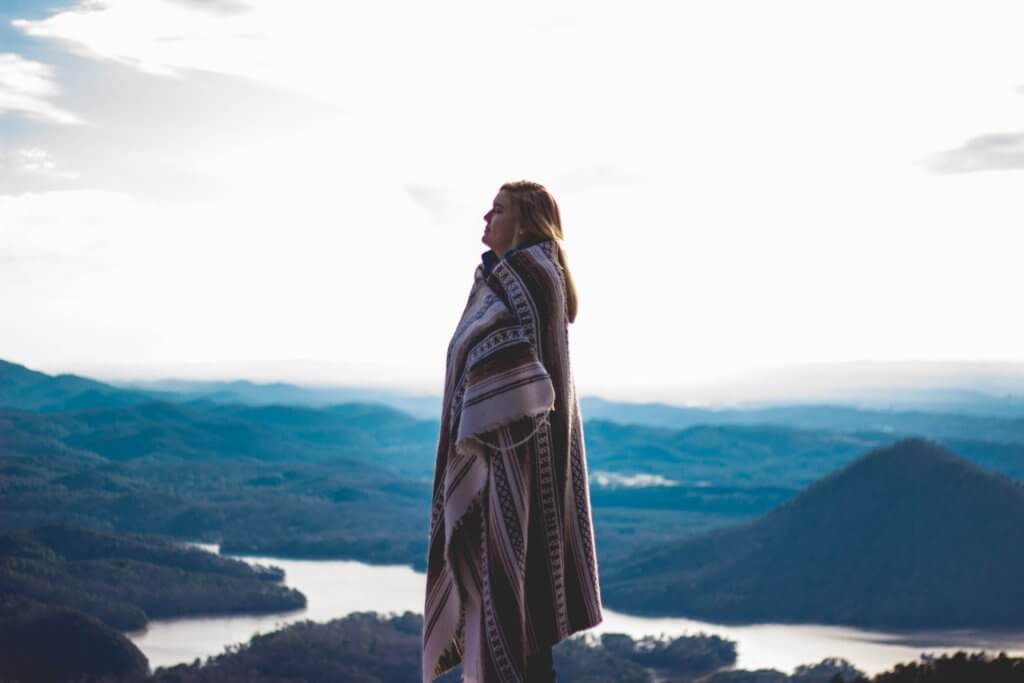 Yes, traditional electric blankets (not the low EMF ones) do pose health risks as they emit large amounts of electromagnetic radiation. And exposure to such radiation is harmful to human health.

Above, I’ve talked about the dangers of exposure to electromagnetic radiation in general. But here, I will specifically focus on the negative effects of electric blankets. Keep in mind, the problems I am going to discuss here are related to normal electric blankets that you can find in the market, not the ones with low EMF emission levels.

Typical electric blankets emit electromagnetic radiation. And if you are exposed to such radiation for a long period of time, there is a chance you will suffer from temporary or long-term health complications because of such exposure.

It is always best to stay away as far as possible from a source of electromagnetic radiation. But with electric blankets, this is not possible considering most people will use their blanket in bed while they sleep. And because of that, they might develop problems relating to sleeping and their energy level.

Several scientific studies have found that exposure to EMF radiation suppresses melatonin synthesis in the pineal gland. This can significantly reduce the quality of sleep.

Another thing with electric blankets, as most people are likely to use them while they sleep, electromagnetic radiation from these blankets can disrupt our body’s natural healing process.

When we sleep, our body enters into repair mode. During this time, our body repairs the damaged cells. So, blasting ourselves with electromagnetic radiation during our sleep is not a good idea.

Moreover, several scientific studies have suggested electric blankets as the cause of many health complications. One such study has found that consistent use of electric blankets may increase the chances of developing breast cancer in women.

Another study published in the European Journal of Cancer Prevention found that those who were continuously exposed to EMF radiation from electric blankets were at a higher risk (about 15%) of developing endometrial cancer as opposed to those who never used such blankets in their life.

As you can see, you can no longer ignore the health problems caused by electric blanket’s electromagnetic radiation. Fortunately, many people are aware of this problem nowadays. And because of that, they are replacing their electric blankets with low EMF ones. And this is the right step to reduce your exposure to such harmful radiation. 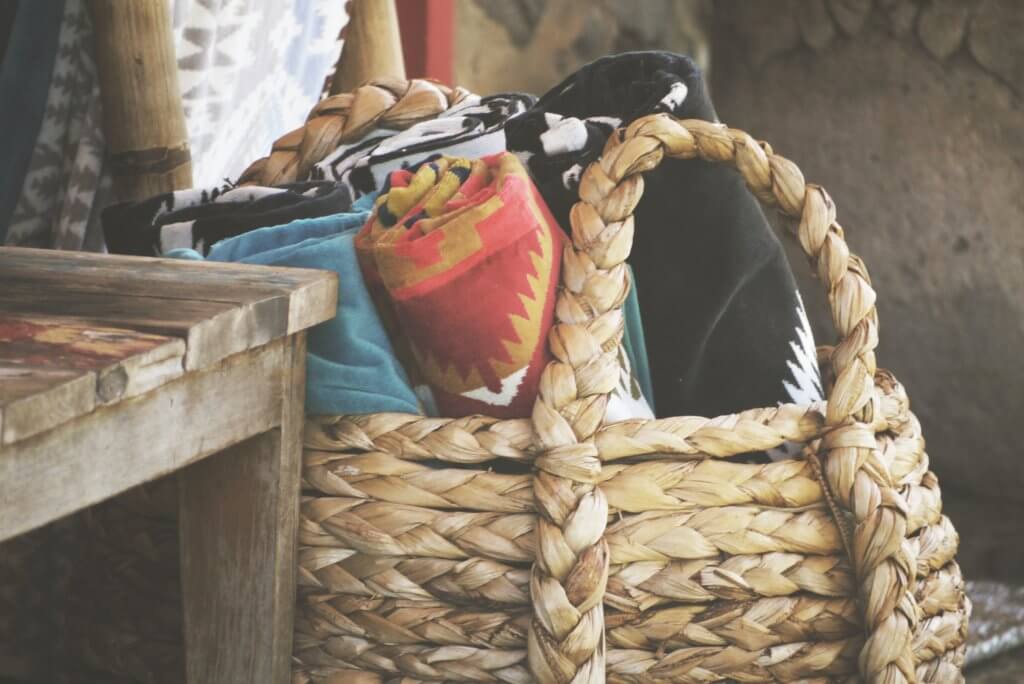 Low EMF electric blankets are the best alternative to traditional electric ones. They do a great job at keeping you warm while emitting little to no electromagnetic radiation at all. So, if you are concerned about your health, go for any of the electric blankets I’ve mentioned in this article.

In case the weather is too cold and you are not willing to use an electric blanket for health reasons, here are some of the things you can do:

Wear More Clothes: Wear thick clothes to bed. If only one layer doesn’t do enough to keep you warm, wear several layers of cloth. Focus on covering the colder parts of your body such as the head, feet, and hands.

Use Warmer Bed Sheets: Choose cotton sheets with higher thread counts. This type of bed sheet is best for creating a feeling of warmth. Flannel bed sheets are the next best thing that you can use to keep you warm in cold weather.

Use More Blankets: This suggestion might appear more obvious to you but piling up blankets will do a great job at keeping you warm and cozy on a cold day. In this way, you are not only keeping yourself warm but also saving electricity that you would have used otherwise on electric blankets.

Yes, EMF can make you sick. But it depends on the amount of radiation and how long you’ve been exposed to it.

What are the symptoms of EMF sensitivity?

Anyone below 5 years old should not use electric blankets or anything that emits large volumes of EMF radiation.

Electric blankets should always be on top. Do not put it under you and squeeze it on the side.

Electric blankets come with a label. The side with the label is the top portion of the blanket. And this side should be up.

They can cause damage to mattresses. Especially the old ones with memory foam. But most newer mattresses do provide protection against heat related damages.

Soak your blanket in cold soapy water for 15 to 20 minutes. Then wash it using a mild type of soap on the “gentle” or similar setting of your washing machine. 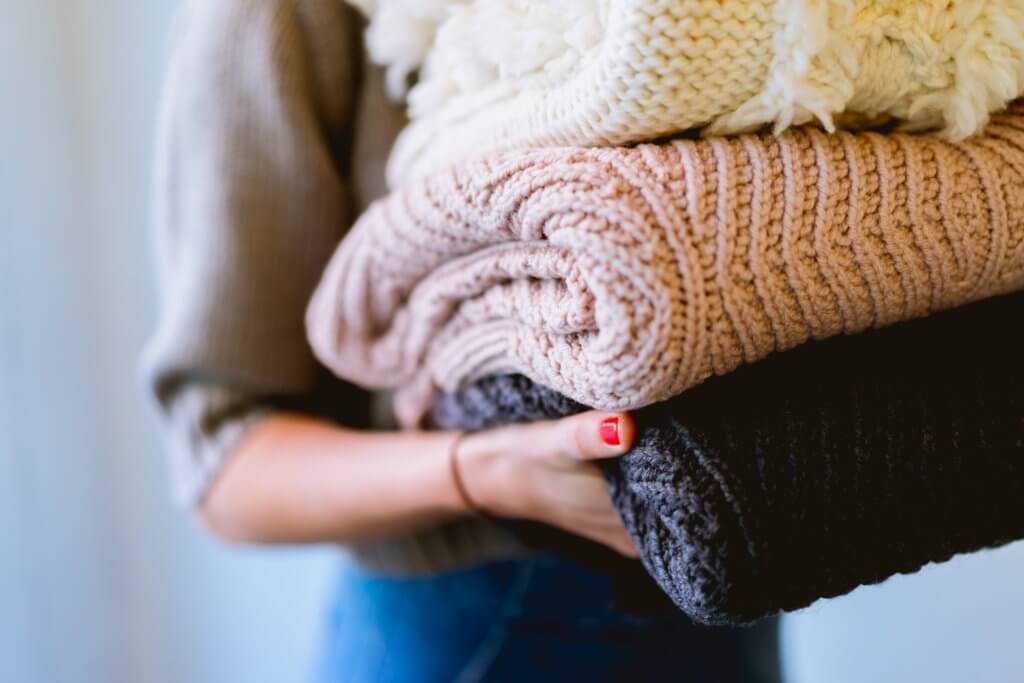 As more and more people are learning about the harmful effects of electromagnetic radiation on human health, they are now trying to reduce their exposure to such radiation. And this has made people look for safer devices such as low EMF electric blankets. And this drive for safer devices will keep increasing in the future.

Hopefully, my list of the best low EMF electric blankets was enough to help you choose the right one for you. Thanks for stopping by and have a nice day.